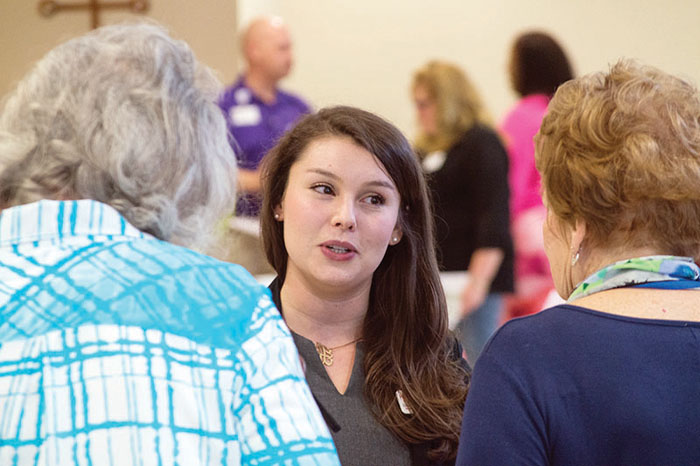 SALISBURY — Alyssa Smith says one of her favorite poems is “Daffodils” by E.E. Cummings.

The very first line is special to her: “In time of daffodils (who know / the goal of living is to grow).”

Growing is a fitting motif for the executive director of Healthy Rowan, a community coalition that was revitalized in 2014. Today, Healthy Rowan boasts some 30 community partnerships.

She was working as a program coordinator for a teenage pregnancy prevention program through the Cabarrus Health Alliance. Members of the Healthy Rowan executive team reached out to the alliance seeking insight on the successes of a similar initiative, Healthy Cabarrus.

Smith said the team asked Healthy Rowan’s then-executive director how they could “get someone like her in Rowan County.”

The director would, in turn, introduce the executive team to Smith.

Smith said she and the Healthy Rowan executives just clicked.

“(Healthy Rowan) was something they were very passionate about, but you can only wear so many hats. You only have so much time,” she said. “For them, it was really helpful for me to come in and say., ‘OK, these are the things you want to get done; let’s see how we can get it done and then take that idea and run with it.’”

Therein, she said, lies the biggest challenge for the year ahead: realizing that this change will not happen overnight.

“If my wildest dreams came true, I would fix the health of everything and I would be out of a job,” she said. “That’s funny, because that’s what public health is all about. You’re trying to fix things to the point you don’t have a job anymore.”

• Favorite book: “This was hard! … I’m a big sci-fi nerd, so my main favorite is ‘Frankenstein’ by Mary Shelley. … For academic, I love the book ‘Nudge.’”

• Who would play you in a movie? Natalie Portman. “That would be my goal person. … I’ve been told I favor her, which is nice, but she’s just a really dedicated actress.”

• What would you want for your last meal? “My sister’s stuffed shells and my dad’s New York-style cheesecake. … I usually get that every birthday.”

• Biggest challenge for the year ahead? “After Thanksgiving, my dad had a major stroke. … I’m very, very close with both of my parents, so kind of working through that and seeing what I need to do to support my mom and my family during this time. There’s going to be a lot of changes that will happen through 2018.”

• Biggest hope for 2018? “Kind of connected to that, I would love for him to get better and just to see him get to come back home would be No. 1. No. 2, what I would also love to see from him is we love having political arguments. I would love for him to get to a place where he could kind of spar back and forth about politics again. … That’s my hope, is that we get to have that kind of conversation again.”

• Who will you be watching in 2018: Rowan-Salisbury Schools Superintendent Lynn Moody. “We need to be more cognizant of technology and how it’s impacting students and how it can impact health. I would love to just continue to watch and see what she’s doing. My other would be the new Salisbury City Council. … I would love to see how Al Heggins is going to respond to this idea of health.”

• Reaction to being named as one to watch: “I was shocked and ecstatic and I just didn’t even think that that would be happening. I think about the coalition and all the people it takes to get something to happen. I never think about myself as the one doing it, so it was exciting and it’s exciting to think about what we can do for the community. … To be recognized as a part of that was really cool.”