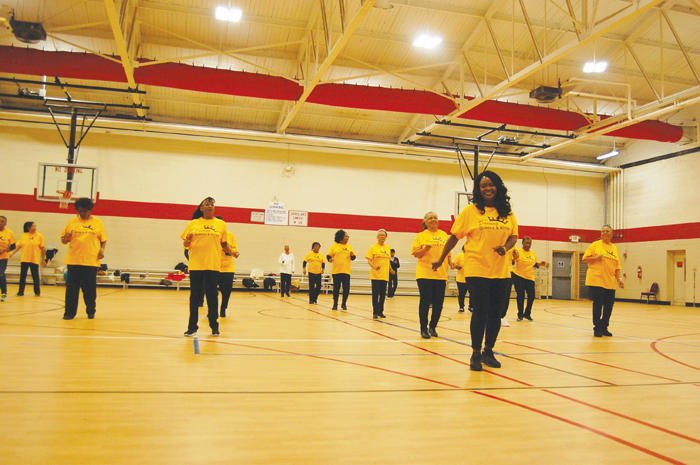 Just a few years ago, Rowan County’s health outcomes could best be described as “dismal.” According to County Health Rankings, Rowan ranked 76th out of 100 counties in health outcomes in 2014 and had lower health outcome rates than all of its neighbors

But with the help of the community coalition Healthy Rowan, the winds are beginning to change.

“What we’re doing with Healthy Rowan is really trying to get people to think about what they do with their life,” said Alyssa Smith, the agency’s executive director.

Krista Woolly, founder of Healthy Rowan, said she first realized there was a problem in 2014. Woolly, who worked for the Community Care Clinic, said that while the clinic addressed the problems of the poorest residents, the county’s overall health outcomes kept getting worse.

“And I thought, (the county) doesn’t work together to do this kind of work,” she said.

So Woolly set up a meeting with community leaders — including city and county officials — and applied for a grant. And in late 2016, after nearly three years of planning and building bridges in the community, Healthy Rowan launched.

“We want to be able to support and provide that backbone for health in our community,” Smith said.

For Novant Health Rowan Medical Center President Dari Caldwell, Healthy Rowan is about identifying the gaps in community care. While there are multiple health organizations and initiatives in the county, they didn’t really work together until Healthy Rowan was started. Now, representatives of the organizations meet, talk and make sure all the health bases are covered.

“It becomes a movement,” Caldwell said. “It’s not just everyone pursuing their missions. It becomes a true movement of the community.”

Healthy Rowan was awarded a Duke Endowment Grant of $150,000 for three years in December 2016. That money has helped the coalition launch programs such as the Daily Mile at local elementary schools, and it funds other community initiatives.

According to Smith, Healthy Rowan’s goal is to help seamlessly fit health and exercise into daily life.

Sometimes, that’s simple things — such as making sure there is always a healthy food option available whereever food is served or making sure that health screenings are easily available at places where people gather. But sometimes, it’s helping people find a form of exercise they like.

Caldwell says Novant has approached its partnership with Healthy Rowan with the attitude, “What can we do to help?”

One of the biggest community health issues Novant and Healthy Rowan are focusing on is obesity. To help combat it, Caldwell said Novant’s cafeteria changed its menu to be healthier, the hospital helped set up weight management programs for employees, and the system now has a doctor specializing in weight loss and bariatric surgery.

“That’s really where the strength (of Healthy Rowan) comes from,” Caldwell said. “When everybody’s rowing in the right direction.”

Just a few years into its mission, Healthy Rowan is already taking small steps toward a better future. Rowan County is now ranked 73rd instead of 76th in health outcomes. It seems like a small victory, but Healthy Rowan has its eyes on a long-term goal — a community where healthy living is the norm. And you don’t get there overnight.

“That’s definitely a positive,” Smith said of the jump in rank. “The stuff we’re trying to do, we may not see an impact for 10 years. And I feel like that’s a hard place, because people are like, ‘OK so what did you do? What did you cure today?’”

In the upcoming years, Smith said Healthy Rowan wants to work to put the walking program the Daily Mile in every elementary school, to target the opioid epidemic and to make local parks tobacco-free.

If the whole county pulls together, residents can achieve a healthier, brighter future, she said.