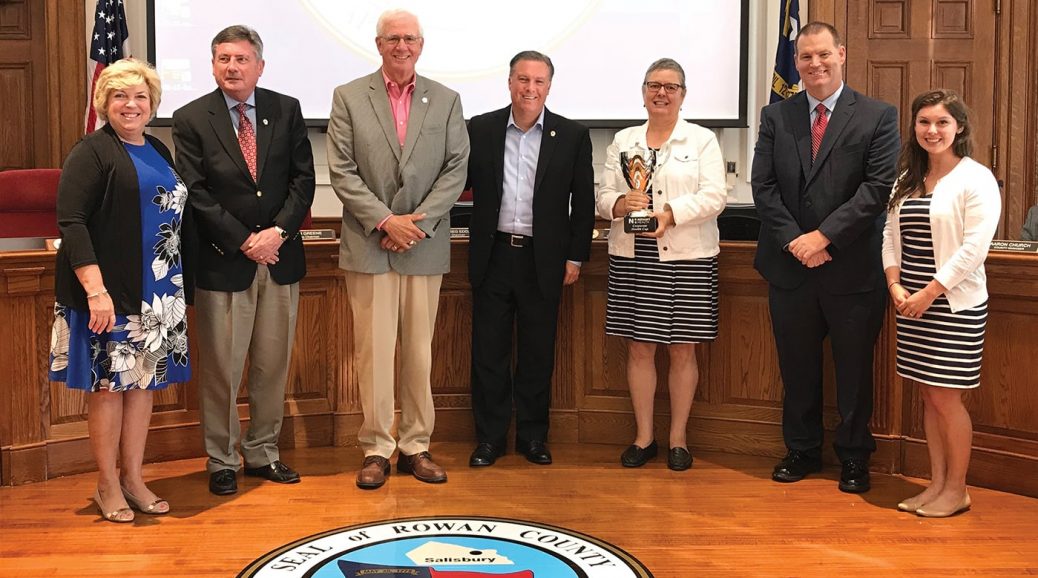 SALISBURY — Dari Caldwell, president of Novant Health Rowan Medical Center, on Monday presented the Rowan County commissioners with what she called “something wonderful.”

The something was the 2018 Corporate Cup, which Caldwell explained.

“It is a trophy to commemorate the organization that, in that year, did the most … to improve the health of our community,” she said.

The award was established in 2015. The winner is chosen in collaboration with the Rowan County Chamber of Commerce, which provides a panel of judges.

Caldwell said Rowan County was chosen after its work to designate parks as tobacco-free zones.

The regulation for tobacco-free parks was passed June 4 after a long push from local health organizations and concerned residents.

It bans traditional cigarettes, e-cigarettes, vaping devices and other uses of tobacco at all county parks, recreation buildings and recreation grounds.

Violators may be asked to leave the facility.

Previously, smoking was prohibited only in designated areas or “any part of any park when it is deemed the fire hazard makes such action advisable.”

Jim Greene, vice chairman of the commissioners, said the county Parks and Recreation Department was in full support of the effort since local residents began petitioning for it.

“The only reason that this wasn’t done several years ago is because of its enforcement,” he said.

Greene said the parks department hires teenage workers and didn’t want to have its younger employees responsible for enforcing the rule.

“(This) is one of those proven medical issues that is so important to the health and welfare of all our citizens, but especially our children,” Klusman said. “… I serve on the Healthy Rowan executive committee, and this was one of our priorities this year.”

“The Healthy Rowan executive steering committee wanted to have the commitment that our parks and rec departments were tobacco-free,” said Caldwell. “We’re trying to move the needle on our county health ranking and get Rowan into the top 50 in North Carolina and out of the bottom 50.”

She said tobacco, in particular, is an area in which the county didn’t do as well as it could have.

Caldwell and Healthy Rowan Executive Director Alyssa Smith met with each commissioner and with Parks and Recreation Director Don Bringle to plead their case.

They also submitted resolutions in support of the cause from the Health Department and the Novant Health Rowan Medical Center board of directors.

The county commissioners voted unanimously to approve the regulation change.

“Rowan County is now proud to be a healthy community with tobacco-free parks,” said Caldwell as she presented the traveling trophy, engraved each year with the name of the new Corporate Cup recipient. “We all thank you very much.”